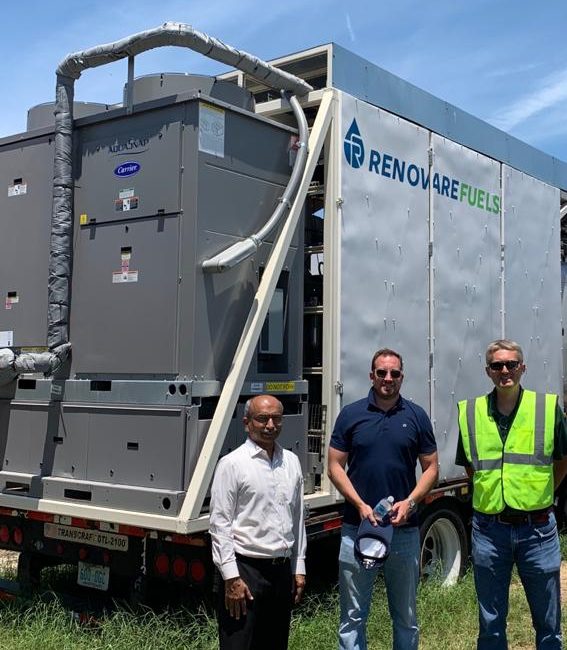 Since the start of 2020, the COVID-19 pandemic has reshaped the landscape of society in countless ways. Multiple nations entered a state of lockdown for several months, with many businesses temporarily closing and placing employees on furlough or implementing home working where possible.

The reduction in commuting combined with restrictions on all but the most necessary travel led to a dramatic decline in carbon emissions worldwide. As travel restrictions in the UK begin to ease and people start to return to their place of work, many are calling for maintaining lowered levels of emissions through a green economic recovery.

Duncan Clark is part of the team at Renovare Fuels that has been researching new low-carbon sources of energy, utilising state-of-the-art technologies to implement infrastructure and systems that have the potential to keep emissions low even as things begin to return to some semblance of normality.

Energy from waste (EfW) technologies produce heat, electricity and other energy sources using products of waste. Where energy can be recovered from biodegradable waste, the use of fossil fuels can be offset.

Renovare Fuels has developed patented technology, which produces liquid fuel from biogas. In the United States, Renovare Fuels has already been operating a successful demonstration of the process for the last year, with the maturity and effectiveness of the technology having been verified by a number of independent third-party tests.

This has the potential to seriously curb transport’s environmental impact – one of the areas that saw the most reductions during the response to the pandemic and one of the largest contributors to global carbon emissions worldwide.

As a long-term plan, this technology has the potential to dramatically reduce carbon emissions from the transport industry, with the comparative ability to displace 98% of CO2 emissions against the use of fossil fuels. Matthew Stone, Renovare Fuels Chairman, is an expert in commercialising clean technology.

Carbon capture and storage (or CCS) technologies create a short- to medium-term solution to reduce the amount of carbon emissions released into the atmosphere. This allows for longer-term technologies and systems to be put into place, which is essential, as the transition to greener, low-carbon energy sources will not be a quick one.

CCS captures the carbon dioxide that is produced either before or after the combustion process and compresses it into a liquid. This liquid can then be used in various processes, including concrete strengthening or the production of steam energy. It can also refill reservoirs of oil and gas that have been depleted.

CCS is an area that has been given particular focus in the call to UK government ministers to maintain lower carbon emissions, as detailed in the annual parliamentary report from the Committee on Climate Change.

Renovare Fuels specialises in the design and manufacture of technology for the conversion of biogas into liquid fuel. Renovare’s fuel properties are almost identical physically and chemically to their analogues derived from fossil fuels, which allows the finished products to be used as direct replacements without the requirement to modify engine design. The fuels can be converted from landfill sites, sewage treatment facilities, and anaerobic digesters.