It’s Monday 13th of July and the newly emerged independent film company founded by Steve Dodsworth and Chelsea Leigh Macleod are gearing up for their festival run after producing their first project together. Waiting For Time ispossibly one of the first UK short films to move into production post lockdown.

Waiting For Time pre-production was executed mostly online.  Worthily Films slowly collected a talented team, each creative had a similar mission: to tell remarkable stories regardless of obstacles that might arise. To say that we faced challenges is an understatement.

Firstly, we had to address every part of the production with COVID in mind. For example:

Secondly, in order to create a safe working environment, we purchased enough cleaning supplies to sterilise a full hospital, which was a challenge in and of itself considering how some supermarket shelves were still bereft of cleaning wipes and gloves.

Thirdly, a very real challenge was the fact that we were producing our first short film as a new independent film production company. We did feel nervous… How is this all going to come together? Will this work?  We decided to ignore our fears and focussed on making sure that we put all the pieces in place and then… we relied on a lot of HOPE.

Fortunately for Worthily Films, we had a story, a passion project that inspired many out of their hibernation of lockdown. Waiting For Time was written by Paul Chronnell and directed by the Bashford Twins.  It relies on dynamic visual storytelling elements and has its most gripping scene in a very specific setting – not a small challenge even for a skilled production designer. We wouldn’t settle for mediocre – not in cast and certainly not in crew.

Mariya Evtimova (Head of Production Design) brought the energy absolutely critical for a nerve-wracking shoot, both because of the imposing potential of the film and the uncertainty of shooting a film under lockdown conditions.

‘The first thing that made me want to work on ‘Waiting for Time’ was the script. After reading it, I was amazed how layered and deep the story was – Paul did an excellent job writing it. In terms of set design, I was really drawn to Heath and how I could add on elements to his character that will visually guide the audience through all the changes in his life leading to his ‘safe place’- the basement.’

Creating a safe space for everyone on set was Worthily Films goal and our mission was to produce this passion project, delivering a message of hope. Working with talent that was driven by story was euphoric. Seeing our team leave with confidence, a feeling of accomplishment and no symptoms was a reward in itself. 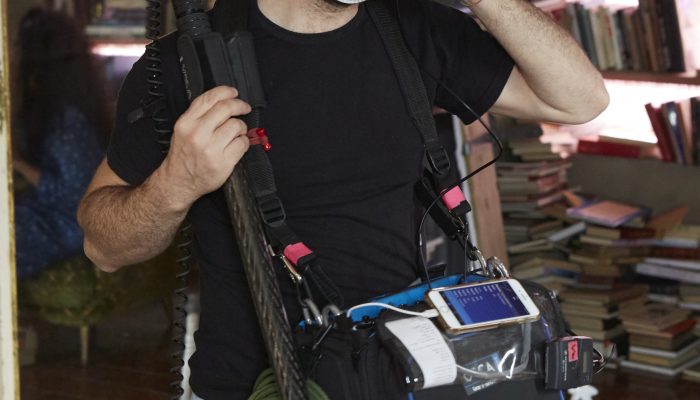