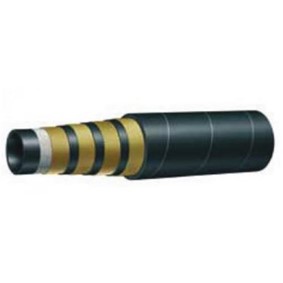 The demand for reliable, heavy-duty braided hoses is high. Braided hose is a crucial component in many automotive, marine and aircraft applications.

Ever since ancient people discovered that you could use hollow reeds for drinking, people have been expanding the uses for hoses. Once the inventors of yesterday realised that gravity could serve equally well as the source of liquid propulsion, it led to the creation of public ducts, water mains and sewers.

The human body was the likely source of some of the inspiration for the hoses used in machinery. It wasn’t lost on people that veins and arteries were responsible for moving the blood in our bodies to areas where it was needed.

Industrial Revolution Accelerates the Use of Hoses

It wasn’t until some time in the early 19th century during the industrial revolution that inventors, including a man named Thomas Hancock, came up with the extrusion process.

In this process, rubber scraps were melted down, and the resulting thick liquid was then forced through a form that created a long flexible, hollow tube. After cooling, the resulting hose served many purposes and continued to be refined through the years to expand its uses.

Pneumatics and Hydraulics Expand the Use of Hoses

As pneumatics and hydraulics were experimented with, their power and potential use became obvious for many industrial applications. In these disciplines, air or water were put under pressure in a confined space that could withstand the forces generated by the pressure. The power generated by pneumatic or hydraulic pressure was able to lift heavy weights and move large objects easily.

As new applications for this power concept continued to be discovered, pneumatics and hydraulics were adapted into more complex and expansive machinery. Hoses of every diameter were employed to carry the air and liquid used, and these hoses had to be able to bear the substantial pressure demanded by the application.

A Focus on Hose Strength

Every engineer knows that a system is only as strong as its weakest link. As the forces generated by pneumatic and hydraulic applications were steadily increasing, the hoses used in the applications began to come under more scrutiny. They were the source of many failures and blowouts. Engineers started increasing their thickness and trying other solutions to prevent these mishaps.

One of the most effective was to surround the hose with a braided cover. Chain mail, used as armour in the middle ages, was known to be able to absorb the force it received and spread it out over a larger area.

This became the obvious solution to the demands placed on hoses by the uses of pneumatics and hydraulics.

Today, SimlecCO is a company in Malaysia that manufactures and distributes state-of-the-art braided hose for any high-pressure industrial application.

Their four-ply spiral wrap, brass-coated hose with three intermediate layers is able to function in temperatures between -40°C and +100°C.

If you have an application that needs a well-designed and constructed hose, contact SimlecCo today.